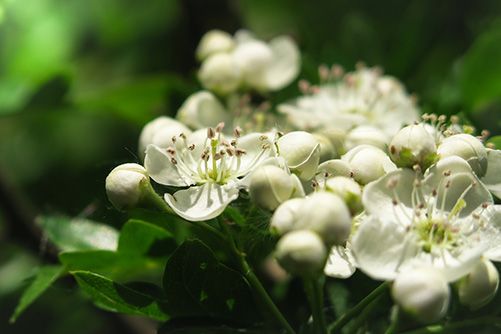 It is located between the tree and the bush, it is common in hedges and edges, and its lifespan can be counted over several centuries. The hawthorn can still reach a height of 4 meters. Its twigs whose light gray bark bears hard and small thorns. Its foliage has toothed leaves that divide from three to five lobes of a beautiful shiny green above and lighter below. In spring they are adorned with pretty pink or creamy white flowers, with stamens in the middle of the five petals. Then the fruits appear, from August to October, they are very fleshy red cenelles which contain many seeds.

It originated in Europe and Asia, then it spread over all of Europe and northern America. It has a very slow growth, indeed planting is done by seed and does not grow until the following year. It is not difficult, and accepts to grow on all the grounds which makes it common everywhere. The hawthorn being a very tough plant, it is very useful for forming hedges or serving as rootstock for pear trees. Picking flowers is done before they bloom.

It also contains innumerable active principles, it is impossible to determine with exactitude which of its principles have a cardio-stimulating action, it is more probable to define the synergy of its complexes which allows this therapeutic virtue.

We find in the leaves, flowers and fruit many flavonoids, such as hyperoside, as well as rutoside and spireoside, but also triterpene acids, acid-phenols, and proanthocyanidols, and finally cyanogenetic heterosides.

More precisely in the flowers, a derivative of vitexin is added, and aromatic amines, as well as trimethylamines. It also contains essential oils and sterols.

It takes its letters of nobility with Commission E, the World Health Organization and ESCOP on its therapeutic virtues of tonic for the heart and antispasmodic. Hawthorn works to regulate heart rate while calming nervous excitement.

It also stabilizes the tension of the arteries, whether high or its opposite. Hawthorn has proven its effectiveness in the specific treatment of class 1 and 2 congestive heart failure, since it strengthens the cardiac system and also blood circulation. Hawthorn works to widen the coronary arteries in order to restore blood flow.

Hawthorn also has abilities in the treatment of central nervous functions, reducing anxiety and restoring phases of sleep. But it should be noted that the hawthorn has a very slow action at the start, but it persists despite the stopping of the taking of the plant.

Practically all the hawthorn plant is used to make infusions, tinctures, capsules, but also in the presentation of tablets, drops and dry extract. In the land of the rising sun, China, the fruits of the hawthorn, are candied in sugar and are used to prepare drinks or sweets such as fruit jellies. It is said in ancient traditions that hawthorn was significant for happiness and prosperity.

She helps and heals